Once arriving in Fukuoka, the stereotypes of sushi, flash cars and chopsticks were abolished and replaced by trains, vending machines and a language the students were excited to use, having learnt it for 4 or 5 years by this stage. In Japan, students were given the opportunity to experience home life in an Eastern-Style house, sleeping on a futon bed, taking shoes off at the door and becoming accustomed to the bath system. Whatever the situation students faced, they took the opportunity to enhance their cultural understanding and speak as much Japanese as possible. Students had the opportunity to visit shrines, go to underground shopping centres and partake in night festivals wearing traditional zeibins (boys) or yukatas (girls).

School days in Japan are long, starting at 7.30 and finishing at 4.30 then followed by club activities. Oberon students had the opportunity to participate in a traditional tea ceremony as their club activity, trying the bitter green tea, made sweet by the beautiful cakes. In such a short time great friendships were formed between the Genkai and Oberon students but after some sad good byes, Oberon began their tour of Japan.

Over the next 7 nights Oberon students continued to travel north through Japan, to places including Hiroshima, Kyoto and Tokyo. Temples and shrines provided a cultural and religious experience of Japan. In Hiroshima Oberon visited the Atomic Bomb Dome, castles and famous islands. In Kyoto, students saw many famous shrines, temples and gardens as well as the Golden Temple in Kyoto and the famous “Nightingale floor”. Tokyo was a bustling metropolis where Oberon visited the Imperial Palace and the new Sky Tree, currently the tallest tower in the world.

The Japan trip was an amazing trip and it is available to all Japanese language students and runs every 2 years. Sayonara 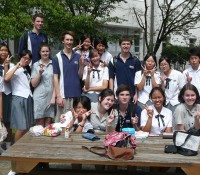 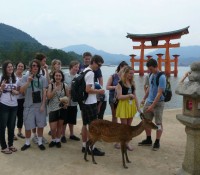 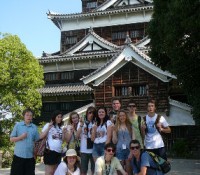